I was asked to teach a spindle class at Juthbacka, a manor house in Nykarleby. Juthbacka is nowadays a restaurant and cultural centre with many kinds of activities. My grandmother used to talk about it with great affection. I think she was one of the house wives that were given the opportunity to have a short vacation in these beautiful surroundings in the 1950s. So this building always makes me think of my dear grandma, who was a textile person in heart and hand. 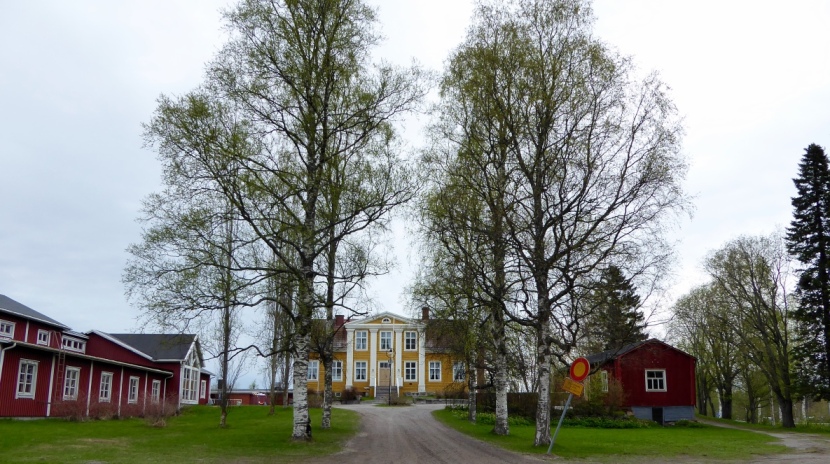 Parkways with birches used to be common in Finland. Even small farms could have two impressive rows of birches leading from the road up to the house. The estate is first mentioned in the census type listings in 1654. Much has happened since then, and there are less flattering newer buildings on the grounds that I prefer not to show. But the main building is beautiful, I think. Not big and impressive, but with good proportions, and inviting.

We spun on the upper floor in a nice room with beautiful light, even on this chilly day with rather heavy clouds. 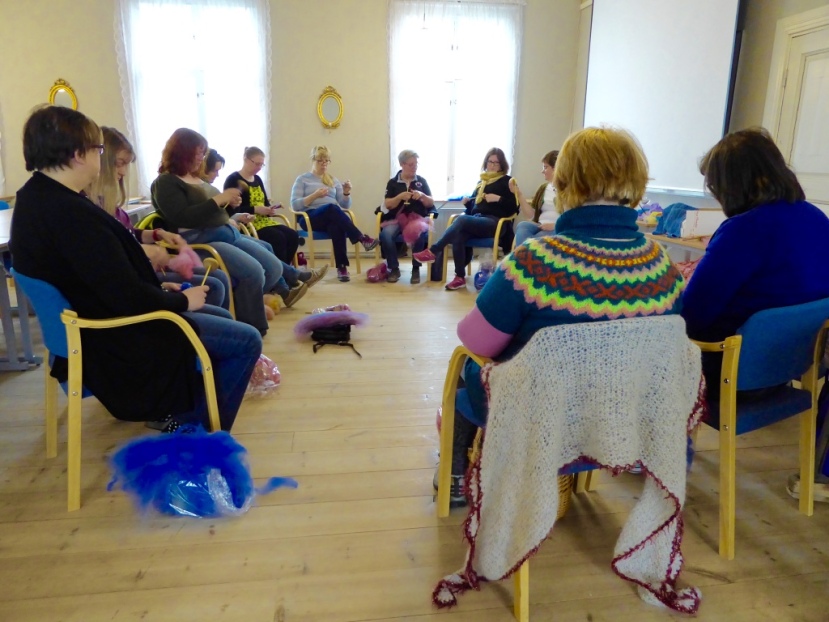 I gave the ladies drum carded colourful batts of Finn-Texel cross and Corriedale. I like that mix. The Finn-Texel is easy to draft also for a complete beginner, and the Corriedale makes it softer without making it more difficult to draft. I also want a beginners batt to have variegated stripes of fibre. It’s easier for them to see how the fibres twist in the singles and in the 2-ply I want them to make during the class. And it helps them to see how colours behave in a yarn.

They learned to pre-draft strips of fiber, a first lesson in handling a batt or top:

I always start with twisty sticks, and after a few minutes we change to a top whorl spindle that isn’t too heavy. You don’t want the yarn to break all the time because the spindle is too heavy for your yarn! Spindles that weigh 30-35 grams are good for the fibre blend I use, but may be slightly too light for plying bulky yarns as one of my pupils discovered. She had to struggle getting the yarn onto the spindle, but she made it!

In fact all my eleven pupils spun, plied, and skeined their first yarn during the day. From the twisty stick to park and draft using a spindle, to letting it go while plying – I was so impressed!

Look at them plying:

And here’s the evidence: 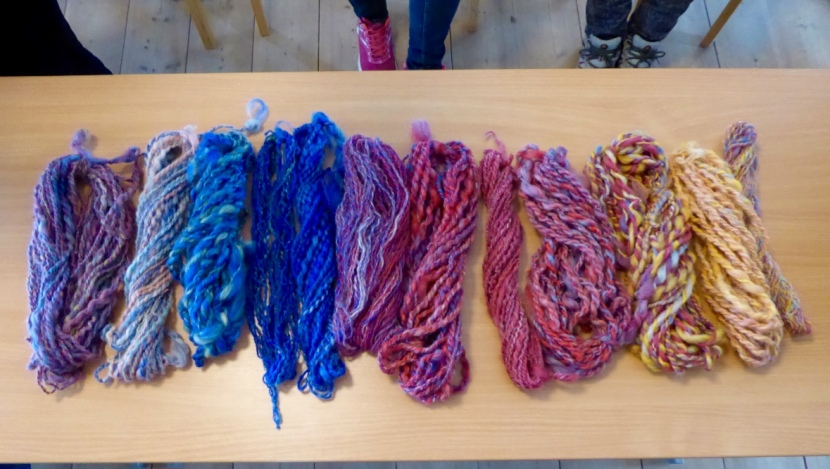 Talking about spindle weights: one of the pupils had an awesome spindle, made by a relative (grandfather?) of hers. Far too heavy for a beginner, but perfect for plying. She used it later in the day for plying the yarn she had spun. Sorry for the quality of the photo! I have seen pictures of spindles like this, but not in real life earlier. I was happy, it’s fine piece of handcraft, and a good tool.

What next? Fibre prep! I think it’s better for beginners to start spinning at once, than to struggle with fibre preparation before they know how the fibres will be used. Learning both the same day is a bit like starting by spinning your yarn if you’re in a beginners knitting class.