This is my last post about Shetland Wool Week 2016.

You may have noticed: no classes for me during Wool Week! It’s partly a choice, and partly because I couldn’t manage to book the classes I wanted to. Shetland Wool Week is booked through a system called Box Office. While I was learning how to use it, all my classes went into a black hole called “sold out”! Kerstin got the same result, so for a moment both of us where a bit dumbstruck.

So what to do? Take tours, go to free events, have fun. That’s what Kerstin and I did, and wow what a week we had! Afterwards, while writing these blog posts, I was wondering how on earth we had time to do all we did.

This last post will take you to the Shetland Flock Book Show and Sale, and to the one class I succeeded to book.

Kerstin and I wanted to go with our friend Sarah Jane to see more of Shetland sheep, and in the end everyone from our self catering ended up at Shetland Rural Centre just outside Lerwick. We went there on Saturday when the rams were shown and later sold at the auktion. Sarah has Shetland sheep at home in the US. and she was able to go behind the scene to follow an expert, while Kerstin and I were led to the show ring by Oliver Henry himself! I think he wanted to get us out from behind the scene where we had accidentally gone in the wake of Sarah.

I took this photo before we were led out by Oliver. He’s having a first glance at the rams before they go into the ring. He’s accompanied by Jen, his successor as wool sorter and classifier at Jamieson and Smith:

It was very quiet, neither the men or women in the ring nor the rams had much to say. There was some pointing with sticks and slow walking to move the rams, but everything was very calm and silent. The man in a blue jumpsuit to the right is Jim Nicolson, who just a few minutes earlier had gotten 40 pounds from me, and a good deal of money from Kerstin also 🙂

After all the pointing at and moving the rams, some of them were let out to the left, and some back through the door in the middle where they had been let in. The latter group had then been decorated with rosettes in different colours, which tells me they had won a prize of some sort. I suppose they were sold at the auktion later. These rams will be used in breeding programs. The photo shows the typical tails of a breed belonging to the group Short Tailed Northern Sheep. 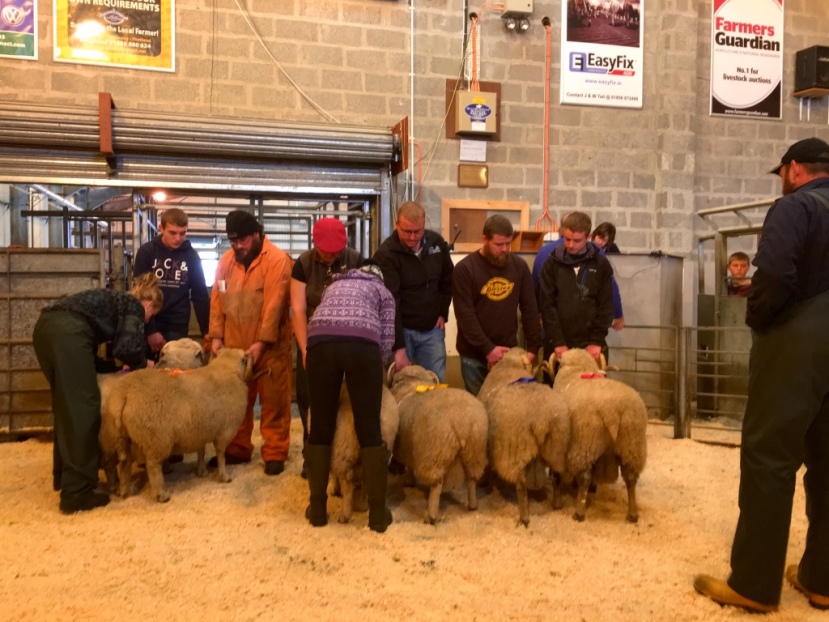 The rams came into the ring in groups: young white, young coloured, older white, older coloured etc. Kerstin and I left after a couple of hours, because the show went on until late in the afternoon.

Below you see three of Jim Nicolson’s coloured fleece. One of them had won the Premium prize: the light grey in the middle. Luckily for me Kerstin wanted the black and darker grey fleeces! I payed 40 pounds for the Premium fleece. I don’t remember what Kerstin payed for her two fleeces. Whatever it was, all three are fully worth their prices. You’ll hear more about mine in due time. It’s washed and now completely dry, and will be stored until I have time to prepare and spin it. Jim said he wouldn’t ask too high a price for the fleeces, but instead be kind to us, so I have no idea what you may be asked for a premium coloured fleece. Or then he was only joking and skinning us old ladies from abroad… 😀

The only class I could get a ticket for was a woodworking class for Cecil Tait from Paparwark Furniture. He makes beautiful furniture and household items. I’ve looked at photos on his site for a few years now, and wished I was rich. So taking a class for him in how to make my own threading hook and nalbinding needle felt like a real temptation. 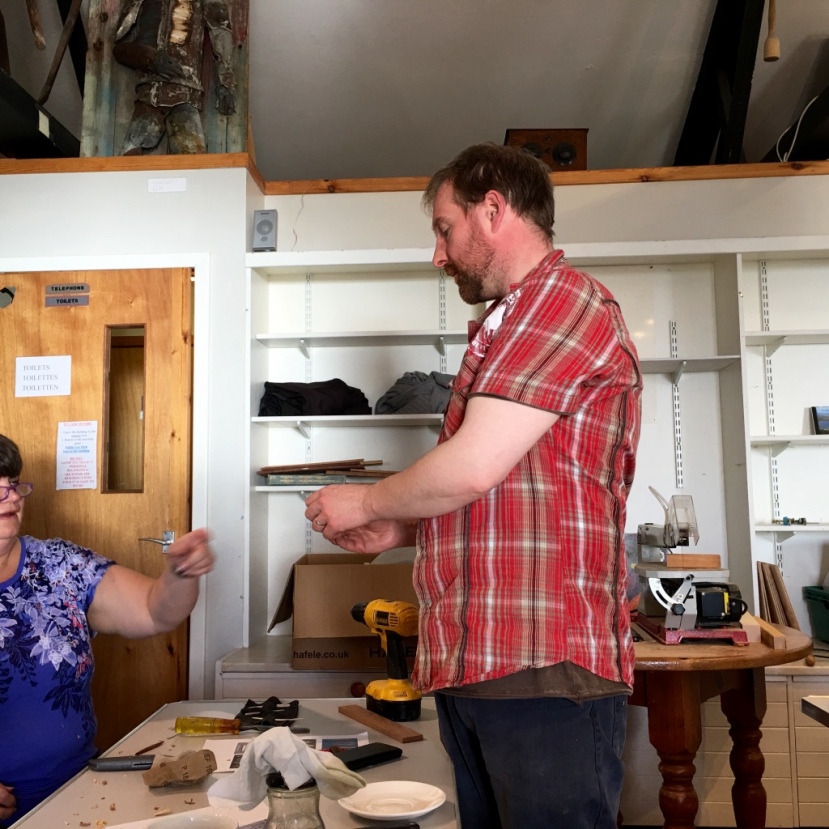 I was a bit afraid I’d have to use an electric saw, and so it happened. First my father and later my husband both forbid me to use their saws because I break the blades. I told Cecil about it when he wanted me to make my piece of mahogany a bit smaller before I started working on it with a knife. He didn’t believe me, so I breathed in some courage and went to the saw – and broke the blade. You can see the scary saw to the right behind Cecil. He looked a bit confused, but changed to a new blade (which the others in the class used without any flying pieces of blade), and then handed me the biggest knife he had taken to the class, a beautiful Norwegian Brusletto. Oh how right it felt in my small hand! Yes, I’m serious! I love to work with knives. And I didn’t have to go near the scary saw anymore. 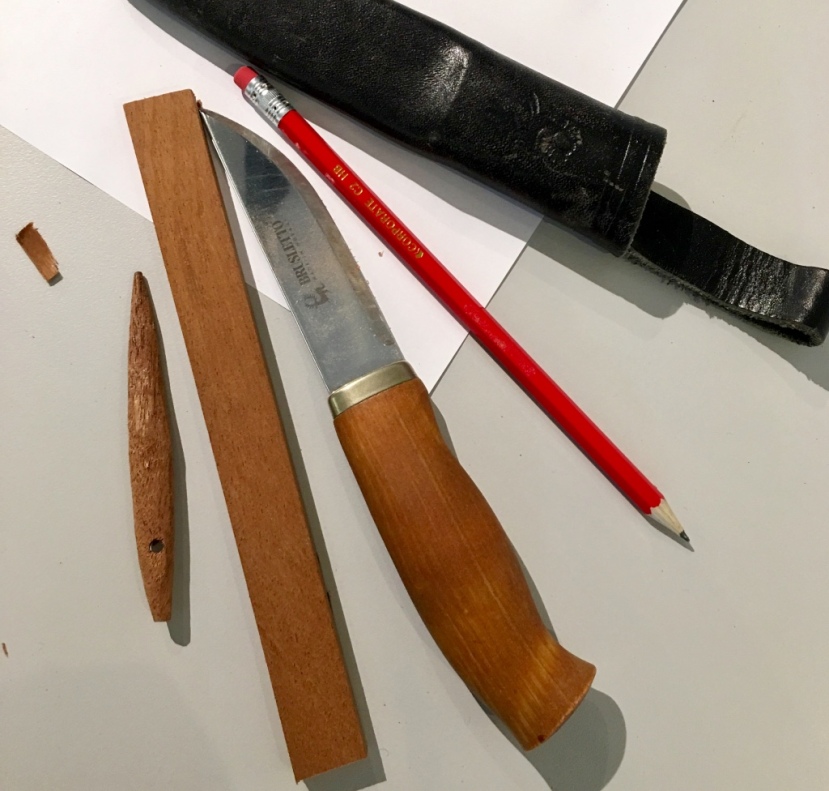 I wasn’t able to finish my hook shaft and needle during the class, but finished them after I came home. Cecil drilled a hole in my needle, and a much smaller hole in the shaft for the hook. 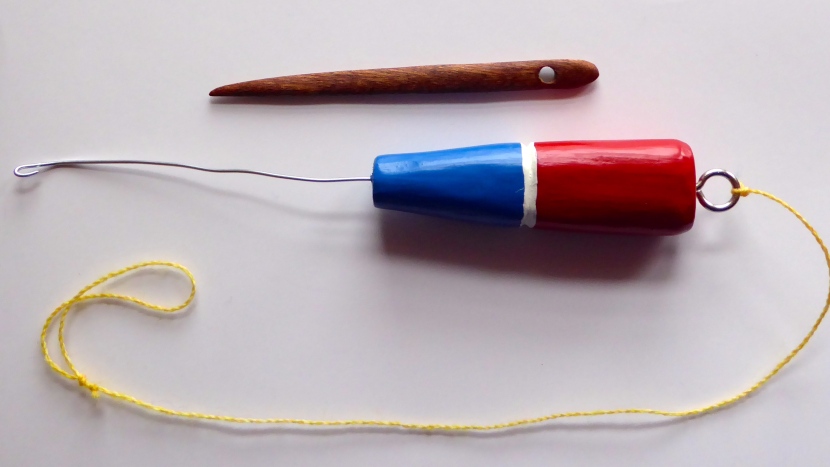 I already want to go back to Shetland. It mustn’t be during Wool Week, it could well be one of the textile tours the islands offers, or I could go with hubby and some friends. There’s so much I didn’t see during my two trips to Shetland! I’d like to sit down in the library and look through their textile books, go to Sumburgh and see the nature centre, and to Ninian’s Island, do some beech combing, go to Eshaness again, take a sea tour and see the bird cliffs again, take a croft tour, see the museums I haven’t had time to see yet, go to Fair Isle and Foula. And much more, like eating at some of the nice restaurants, which Kerstin and I didn’t have time to do during our busy week. Believe it or not, but I lived mostly on boiled eggs and good English ham and cheese and Swedish yoghurt the whole week. Only one evening did Kerstin, Veronica and I have time to go the Chinese restaurant just round the corner: lovely fish!