Hi everybody, it’s been a while!

As some of you know, I haven’t been well these past months. But I’m still spinning, knitting, crocheting, dyeing, and weaving. I just haven’t had enough energy to also write.

Anyway, Wovember has started well for my part. I’m spinning the Premium Coloured Shetland fleece I bought last year at Shetland Flock Book. It’ll be a very thin 2-ply lace yarn (41 wpi/singles, will bloom when washed). I carded the fleece after first testing to comb. Combing took away at least 50% of the fleece, so I decided to drum card. A true worsted yarn would be better for lace, but you can’t always get your way with things! I use a worsted draw, though, so it’s a semi-something yarn. I scoured the fleece last year, and left most of the lanolin in it so I wouldn’t have to oil the fleece for carding or combing.

I’ve also spun quite a lot on spindles during the summer. These small skeins are the latest, all also plied on spindles. If you don’t already chain ply on top whorl spindles, watch Chewiedox’ instruction video. Easy! And fun.

Isn’t that spindle beautiful? It’s from Forsnäs Hemman in the Swedish Lapland. The wood is rowan, one of my favourite trees.

I have given up teaching, but I do have two pupils who are studying for there apprenticeship in our local guild. Sometimes we just meet to have fun, like in October when we dyed wool and wool tops. These tops are ready for the steam cooker:

I crocheted a blanket for a family member. It’s a Christmas present, so I won’t tell you who’ll get it.

Hubby has been busy too. In August our barn looked like this: 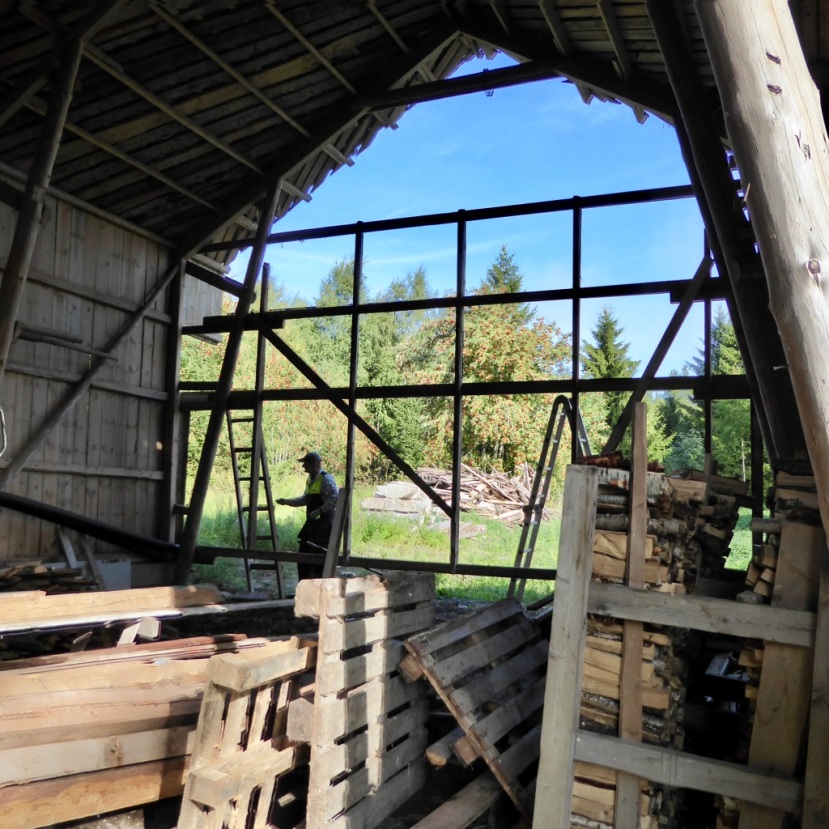 Now he’s almost finished, re-using the planks and boards from the parts that had to go. Some red paint will change it completely, but I really like how it looks now.

And Kasper? He’s fine, only tired like old dogs often are. He doesn’t want to go on long walks every day. He was happy for the snow we had a couple of weeks ago, and not so happy when it melted the next day.

The sun doesn’t rise high now in November, so when it sometimes gets to shine a bit the effects are dramatic and very good for your spirit. 8:30 in the morning:

It was a good year for the rowans, of which we have plenty here. All those berries made it possible for some of the migratory birds stay here until a couple of days ago. Now they have eaten almost everything, and moved south.

Indoors the old Amaryllis is blooming after having spent the summer outdoors.