When I looked deeper into my box with rags cut for weaving, I found a ball that seemed to have at least two colours in it. The weft was clearly cut by my grandma, so the ball has followed me for centuries. My mother gave it to me in the 80s when I bought my first loom. I also found some blue rag weft that a friend gave me in the 80s, and green-white stretchy rags that came with my new loom. 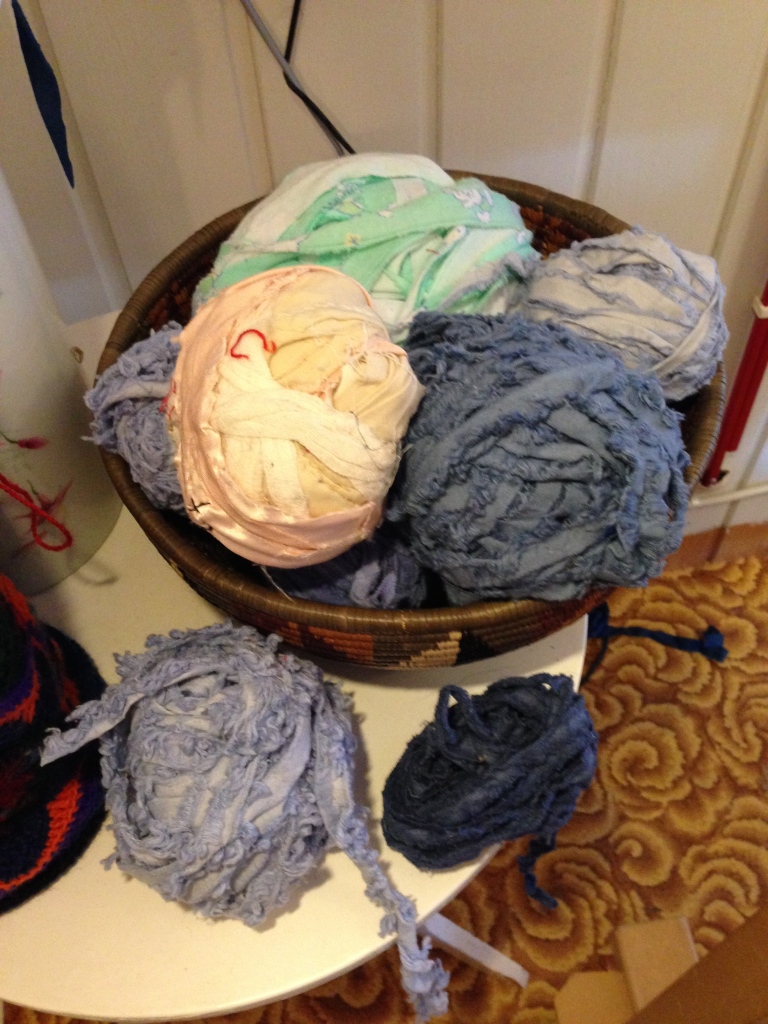 So let’s see what’s in the pink-white ball: 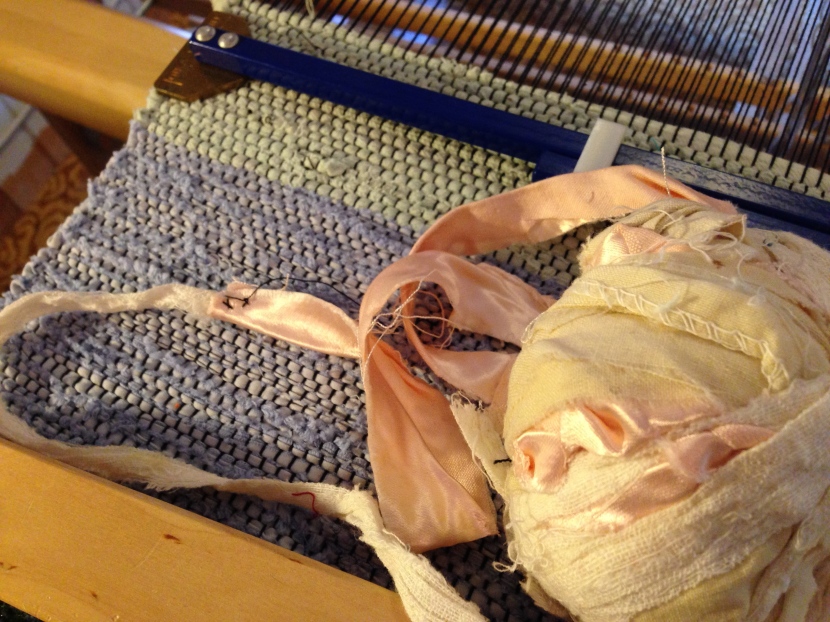 The cotton band with sewing threads still hanging from it:

Grandma has sewn some of the rags together with black yarn: 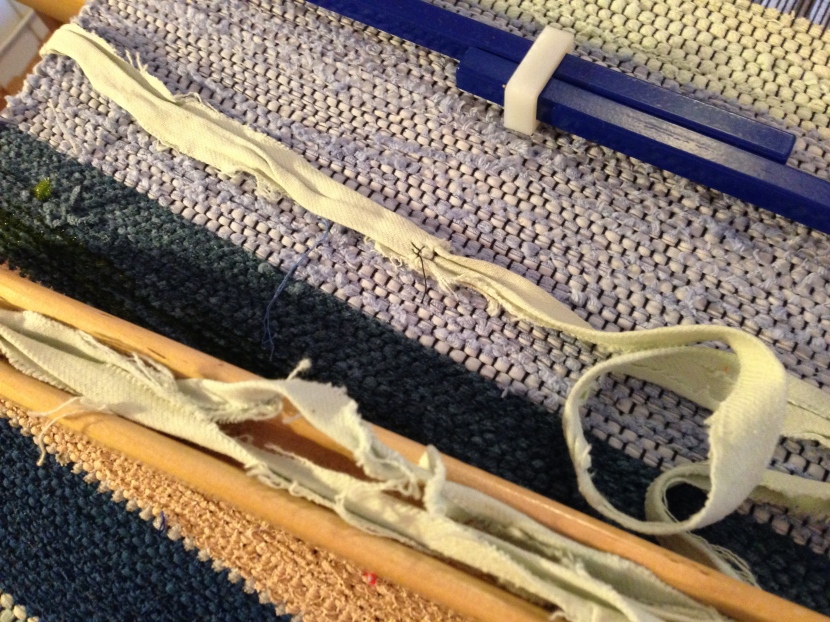 And all of a sudden I find something forbidden: a knot. And soon after more knots. Why did she do this? She strictly forbid me to use knots when she taught me how to cut rag weft: 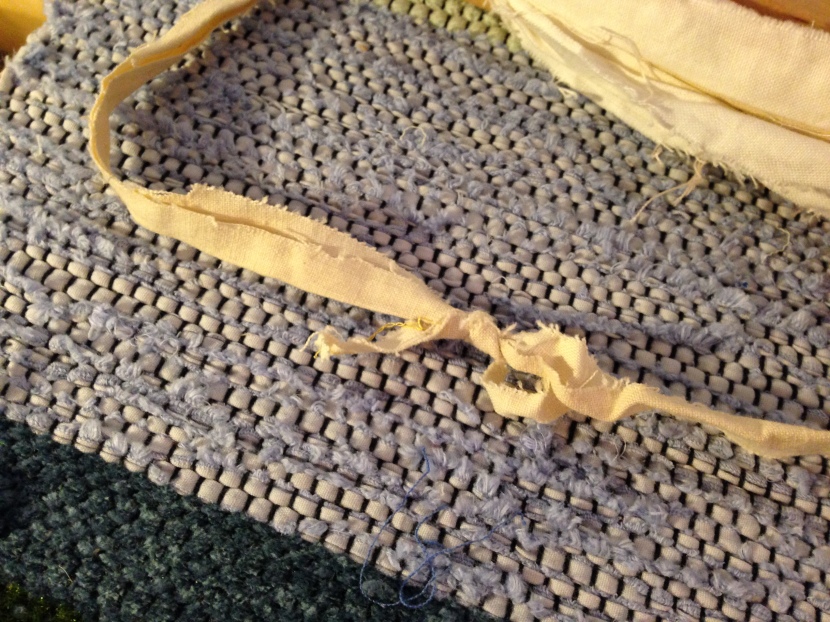 Don’t mind the green weft above. It’s there only to separate the place mat I wove earlier from the blue-white-green-pink rug I’m weaving now, and will be removed later.

I tried to open one of the knots, but grandma was strong still in her old age. She was close to 90 years old when she sat in our garden turning old clothes into something useful. I couldn’t open the knot, so I decided to leave everything in the ball as it was and just beat it into the weave.

Knot bobble. It feels nice under my hand: 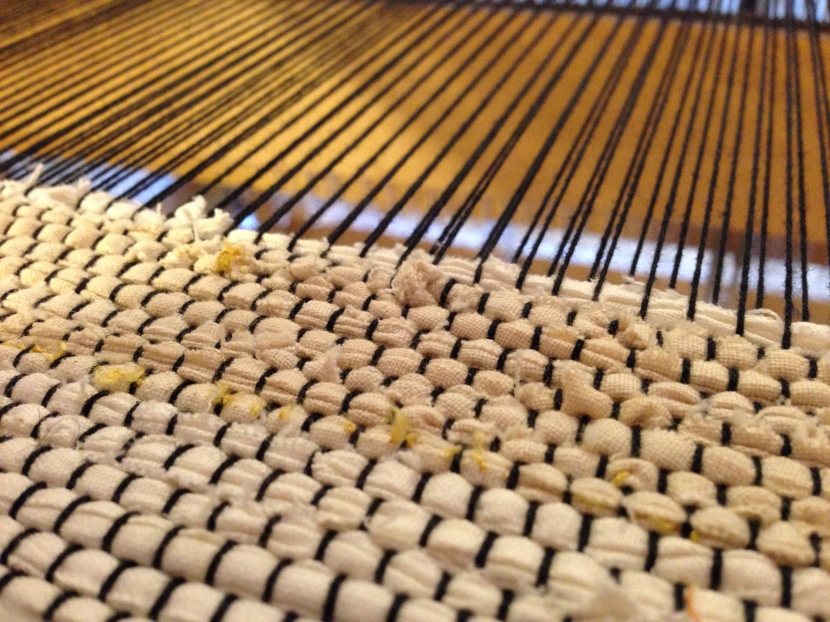 I don’t mind the bobbles! This will not be a very strong rug weave as I don’t beat very hard.

This is one way of cutting fabric. When you reach the end of the piece, cut like this. You can also cut to the end and sew the pieces  together. Nowadays I think people just trim the ends and place them along side each other and beat them in. I do that most of the time when I weave poppana.

I have two more balls that may contain surprises. I won’t open them, I’ll just weave and see what will reveal:

Oh grandma! I loved her. She worked hard from early childhood, only the last years where easier. She used to sit by the window watching people go by, and once in a while she made coffee and we had a cup together. I’m so happy she lived in our house the last few years of her life.