My husband and I were in Stockholm last weekend. We didn’t go anywhere, so I don’t have anything to show other than a snowy street and my granddaughter having great fun. 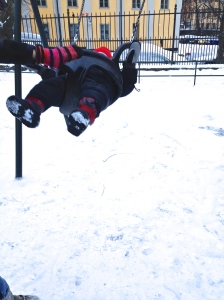 Just think that you can live in a big city with white snow and peaceful streets! It was as quiet as in the countryside, only a few blocks away from Slussen.

I met two spinners while in Stockholm. The other one brought me a spinner’s delight from the US, thanks so much, Kerry! 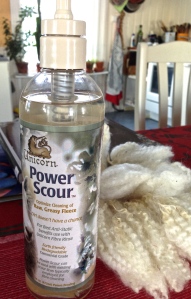 Power Scour, not sold in Finland as far as I know. How do they think anyone can live without Power Scour? Washing my fleeces will be a piece of cake for a while. Then I’ll seriously start thinking of ordering it from the UK, because I don’t want to use anything else after having tried this. My white Finn fleece is soon washed, and I can go on with the other fleeces. There’s quite a heap of them, I’ll tell more in another post. I also met another Ravelry friend whom I’ve been talking to for several years, and also has met IRL a few times earlier. Such a good place to get to know people, Ravelry!

We finally have snow here in western Finland, and it’s cold as it should be in winter. Now I need my woollens! Kasper thinks it’s nice, too, but he already has his woollens on. I think I’ll knit him a sweater one day anyway. He’ll be 10 years old this spring, and will need something warm in winter.